My wedding in quad

On Monday June 13th, around 12:30 pm, during a 7 days ride around the Gaspésie, my partner of the last 35 years and I officially got married. The ceremony happened in the most beautiful cathedral in Quebec, under a radiant sun, with the collaboration of our friends who organized the ride and the participants. I couldn’t have dreamed of a more beautiful wedding, on a quad, covered in dust, on top of Mont St-Pierre with the sea on one side and the Chic Chocs on the other.

The idea of realizing our union on a quad was born in the winter, when Benoit proposed to me for the third time. For the record, I said yes all three times, but let’s stay on the subject… 🙂 Well decided to unite in a way that suits us, and already registered as participants in the organized tour of the Gaspésie in June, we quickly made up our minds and were excited about the idea of having our wedding during this tour.

In January, we presented our project to Eric, one of the organizers of the tour and the one with whom we did our first quad rides, and proposed to him to be our officiant. In Quebec, it is possible to be a designated celebrant (or celebrant for a day) up to three times in one’s life if one meets certain criteria. The bride and groom and the officiant must complete an application to the Registrar of Civil Status at least three months before the planned wedding date so that the officiant can carry out the steps required by law, from the publication of the notice of marriage to the transmission of the final documents. Since he has gladly accepted, we asked our best, Julie and André, both of whom are also quad riders and who guided and advised us at the beginning. This wink of realizing our union with these three friends who have so warmly welcomed us in the quad world has not been noticed, but for me it was very symbolic.

Augusta Motorpark: You won't come out clean, we guarantee it!

The months passed and the preparation was finished. Julie took care of making the most beautiful bridal bouquet on earth, we got the ribbons, the blue tooth speakers for the little dance at the end of the ceremony and the wedding rings. Moreover, all the ceremony will be filmed from the drone of Denis who kindly accepted to immortalize our union from the air. Finally, it was time to go to Amqui, where we met the other participants of the tour. For the most part, they are regulars like us, who are on their third participation in this tour. During the welcome dinner, it was announced that there would be a special event at the top of Mont St-Pierre, a wedding celebration. The group was surprised and very happy to live this moment with us. The only downside was the weather forecast, which for the past week had been predicting rain and overcast conditions for the wedding day. We agree with the organization that the visibility at the top of Mount St-Pierre will be crucial for the ceremony. At worst, we will find another beautiful site along the route, there are so many in Gaspésie that it should be easy.

On the morning of June 13th, the weather forecast announces sun in the morning and rain in the afternoon. We had to cross a part of the mountain that could be a problem with snow (yes, snow) that could block our way, then pass Mount St-Louis and then climb Mount St-Pierre, the site of the ceremony, all before dinner. The timing is tight to beat the forecasted rain. We did cross two sections of snow where a few vehicles got stuck, but without much damage. 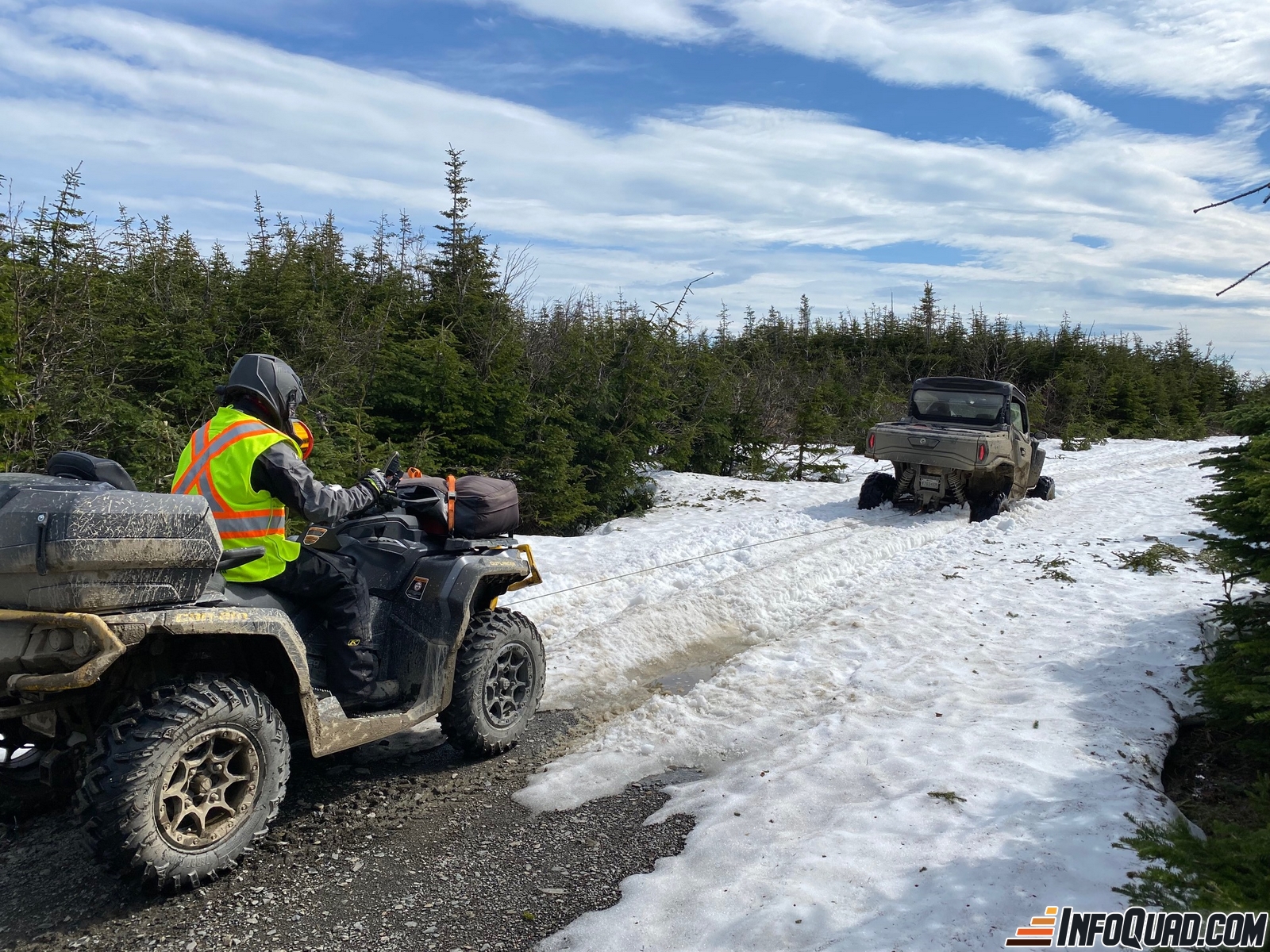 It is rather the mud accumulated in the radiator of my partner which causes us problems, it hardly goes up because its engine overheats and it must stop frequently to let it cool. Jokingly, I tell him that he won’t get away with it, that I will pull him up if I have to. Finally, after asking a resident for help and using her garden hose to wash his radiator, Benoit easily climbs the last mountain that separates him from his bachelorhood.

After positioning and decorating the ATVs, just before the ceremony, I looked around and thought “this is just perfect”. Even the sky added to the enchantment of the setting to make it an unforgettable moment. Eric celebrated our wedding, we signed the official documents on the trunk of my ATV, we danced between the sky and the sea under a shower of soap bubbles, and then we headed back out on the trails. It was magical.

I didn’t expect it, in fact I didn’t even think about it. Thank you to the organization who gave us a nice surprise by offering us the best rooms of all the hotels we visited during what was finally our honeymoon. 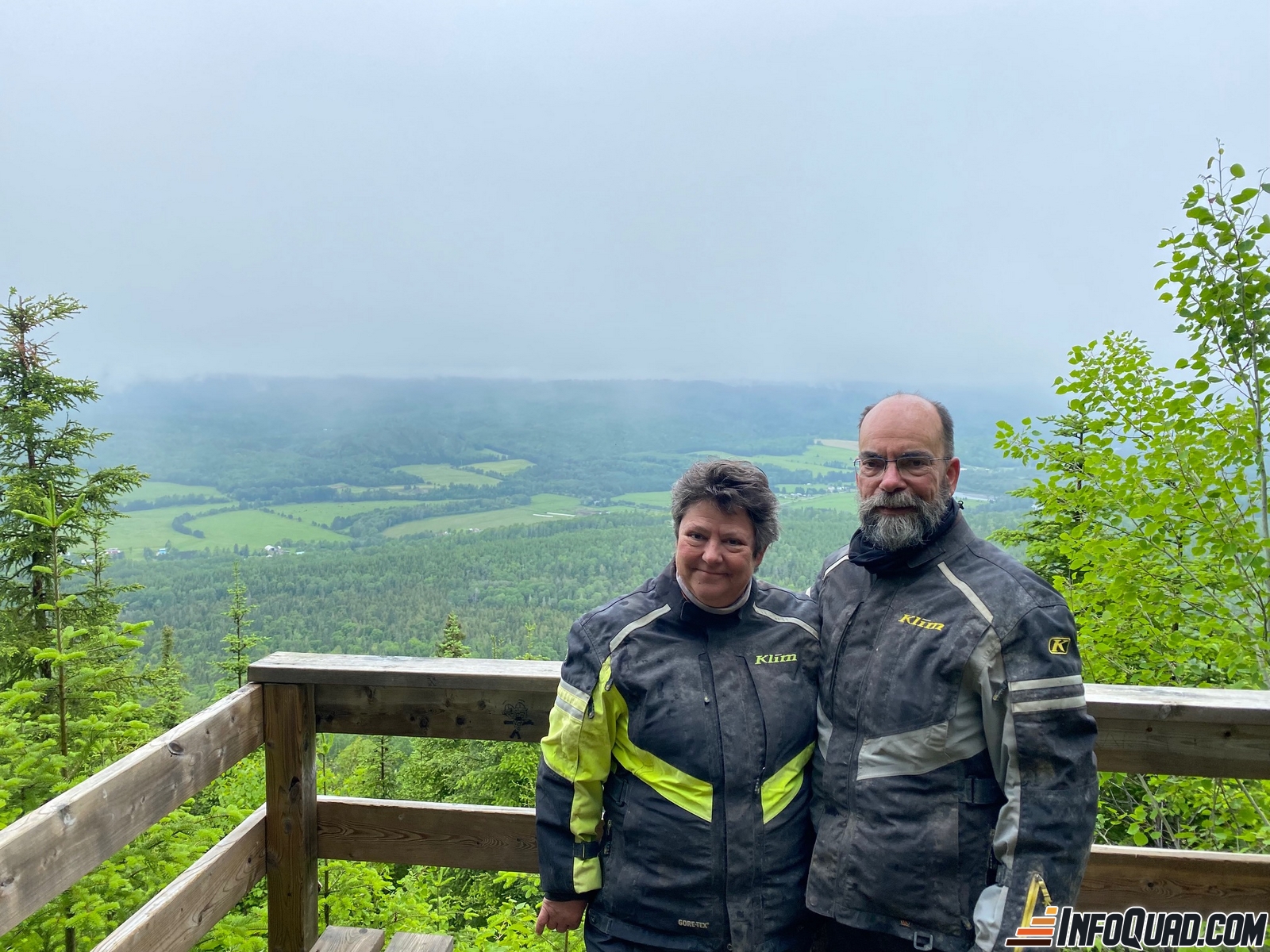 Finntrail Trace 30l Hiking Backpack
Yamaha Grizzly SE EPS 2022 – The tradition continues.
Augusta Motorpark: You won’t come out clean, we guarantee it!
A ride in Hawaii at Waipi’o on Horseback Ranch!
Electric, hybrid or gas-powered quads – which is the future?