Custom Motoquad : to make you stand out 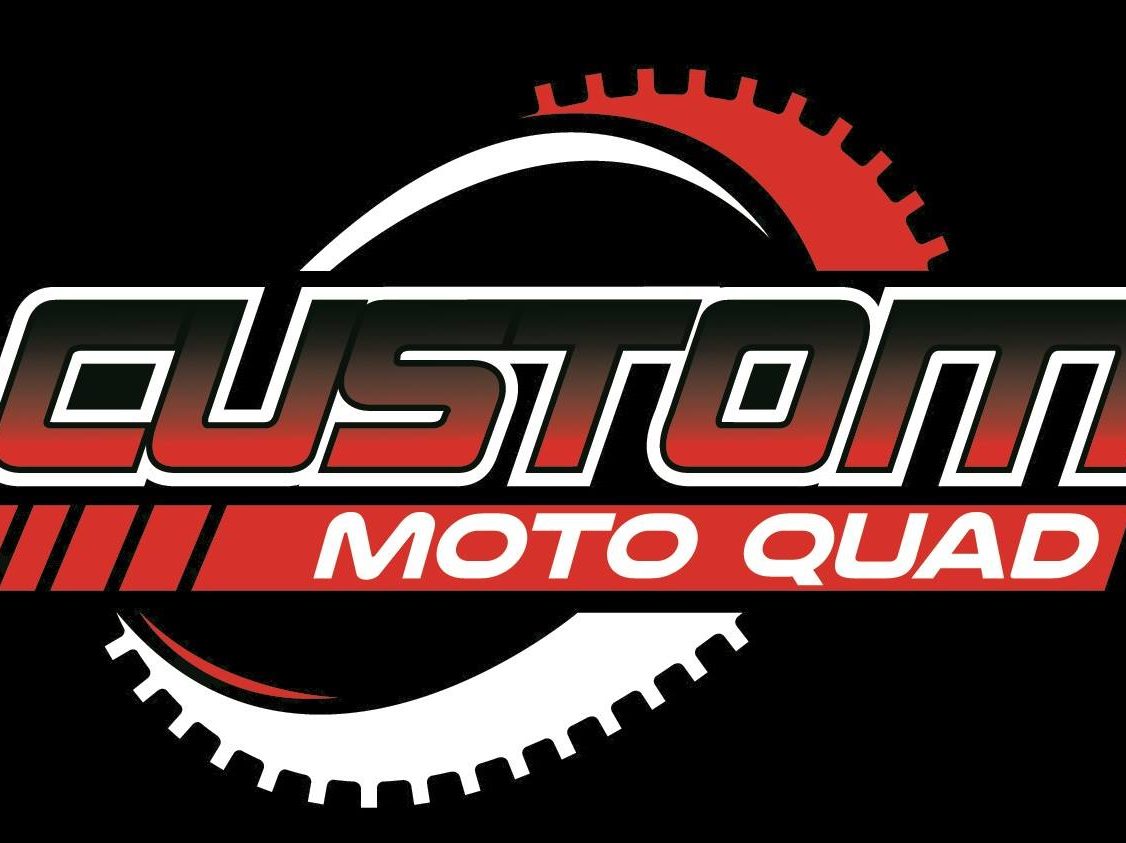 You know me, I like to share my great discoveries with you and here is one that I love. A Quebec family business owned by Guillaume Leduc and his wife Julie: Custom Motoquad. They created their company about 6 years ago in Sainte-Cécile-de-Milton (located between Granby and Saint-Hyacinthe). Guillaume and his wife have been together for nearly 17 years and are both great ATV enthusiasts.

Julie grew up on a farm, while Guillaume’s parents owned land. They have, therefore, experienced the pleasure of driving and escaping into nature on a quad. With this type of childhood, let’s just say that having a business like this fits very well with their personalities. 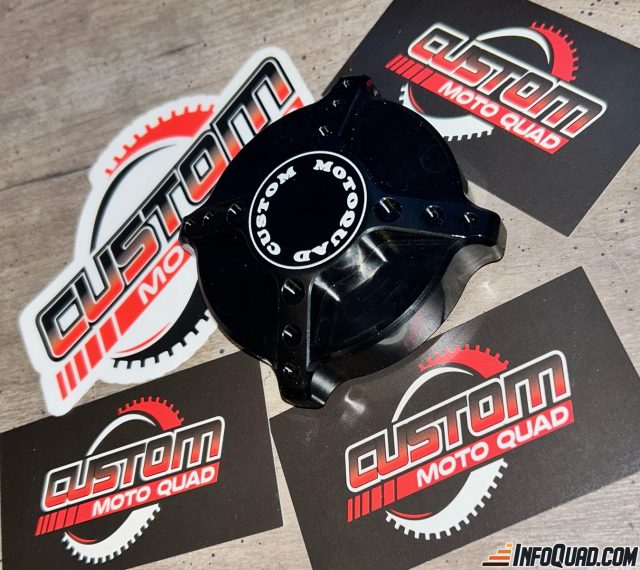 How does the story begin?

It starts with his brother-in-law who, according to Guillaume, is not very delicate with his machines and had broken his throttle with his foot while getting off his Polaris Scrambler. After inquiring with his dealer, he learned that the cost of this part was $140.

Consequently, the request came, to produce a more durable version in aluminum, it was just a matter of finding a CNC machinist/drafter/programmer. Guillaume, who has this background and a degree in automated production engineering, was asked to manufacture the throttle.

The drawing for the part was designed, manufactured, and once installed, his brother-in-law shared posts on Facebook bragging about his new ATV modification. Suddenly, it was a snowball! Some groups in Quebec, Canada and the United States started making requests to get one too.

What had to happen happened. The brother-in-law in question then broke his front differential and asked if it would be possible to make a foolproof one as he had seen online. Indeed, it seems that the Polaris Scrambler and Sportsman models have a small deficiency on this side since 2009, Guillaume explains.

A ride in Hawaii at Waipi'o on Horseback Ranch!

A passion that is shared in their relationship

Guillaume explains to me that he starts from the ground up and that he analyzes and designs things to make them more efficient. That he prepares the design for production, but he gives a lot of the credit to his wife Julie! He tells me that she does the sketches and she is the one who gives the wow effect to their products. They like to listen to their customers and respond to their needs.

Groups like Bouette Quebec have approached him for gear knobs, gas caps, and air box covers. One of their biggest sellers is their knobs with finger holes. It wasn’t easy to find one so once again, Custom Motoquad filled the need. One thing led to another and they found a new partner who does baked-on powder coats and experimented with Can-Am green and black.

During my interview with him at an event, someone approaches him to ask about a knob for a Scrambler. He explained to both of us that he would like to design one. He tells us that the engineer in him knows that it would be done. However, the cost would be significant, since the one for this model of ATV is not just a knob that installs on a screw like the Can-Am ones. Instead, it is an 18-inch arm that goes to the transmission. 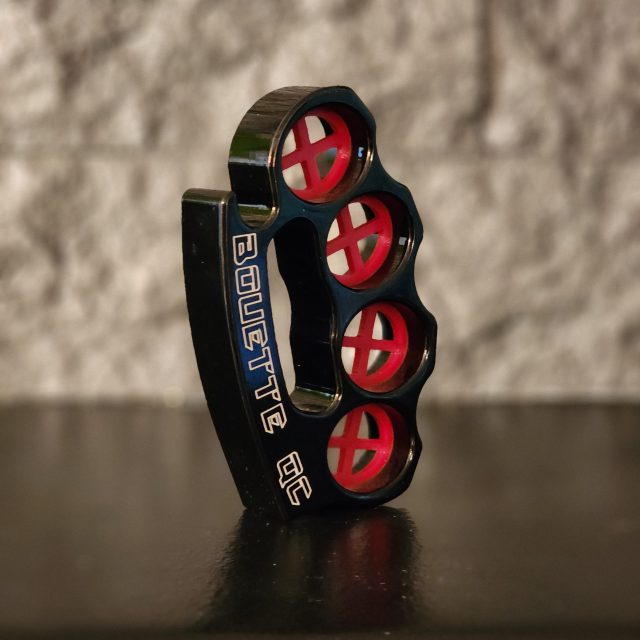 I also asked him about his pricing process. They do market research, but they really want to make sure that they don’t oversell their products so that everyone benefits, both him and the suppliers who sell the items. Over time, they receive orders from the United States, Mexico, Europe, and Australia.

This is very impressive for a company that is only 6 years old! I was curious if he had any idea how these people heard about him. He explained that about a year and a half ago, he took a marketing course and learned that influencers on social networks are one of the biggest keys to success. His clients’ posts on them have been his best advertising to date.

Electric, hybrid or gas-powered quads - which is the future?

It was then that Guillaume told me that the long-term plan was to live solely from his company, but that he had reservations about taking on the project entirely. He has a good job and his boss accommodates him by renting him the necessary machinery to manufacture his products on weekends.

This machinery is very expensive, about $150,000, and takes industrial-grade electricity at about 600 volts. It is not very feasible to set up at home. There are cheaper and smaller alternatives, but the production time is also ten times longer. 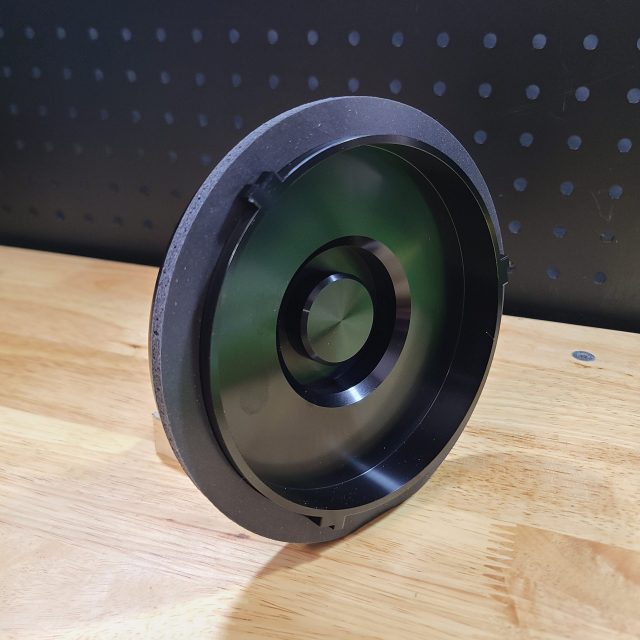 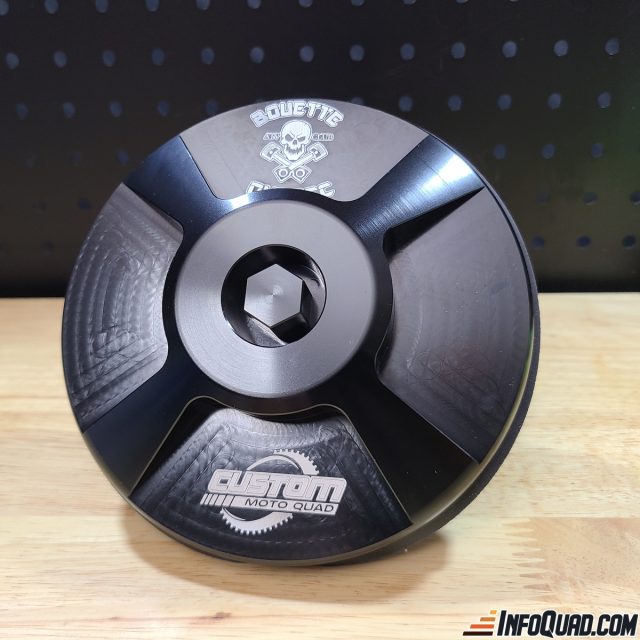 A quick explanation of the production

In my constant need to understand how things work, I asked how the production is done. He uses a block about 1.5 inches by 6 inches that he inserts into a machine, makes part of the block, rotates it and then makes the remaining part.

Several technical terms, but during his explanation, my understanding was such that the process was similar to a 3D printer. That’s not exactly the case, it’s a digital machine too which requires programming codes, but unlike the 3D printer which adds layers, the machinery he uses removes layers.

What are Custom Motoquad’s plans for the future?

Guillaume would like to be autonomous with the purchase of his own machinery. He would like to design other products and he has a customer in Ontario who has been asking for a gear knob for a side-by-side for a long time. He says the possibilities are pretty much endless for future projects. It’s a long-term project that can be daunting so he’ll ride the wave and see where it takes him.

To get their products, you can visit their website at www.custommq.ca they have different products, and different colours available. Do not hesitate to contact them if you have any questions, they will be happy to answer you.

Check out our latest articles:

Everything you need to know to plan a successful ride 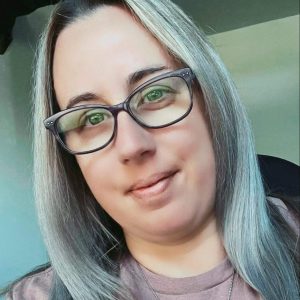 Annik had her first experience on a quad when she was very young. However, she waited almost 30 years went by before she was back on that type of vehicle. She only recently traded the passenger seat for the drivers. Ever since, it’s been a complete revelation and she hasn’t let up. Above all, she has a passion for mud, and she pushes her limits constantly. Proud mother of young woman and stepmom to 2 boys, her family keeps her quite busy. However, she keeps time for herself aboard her quad to escape from daily tensions. She is a loyal woman and highly sociable. She adores meeting new people and if you have the chance to make her acquaintance, you will certainly have a new friend in your repertoire. Annik has a thirst for knowledge, whether it’s maintenance, functionality or any rudiments pertaining to quads. New to being an influencer, she likes exploring the social medias offered to her, and at the same time, share her best (or worst) moments and her passion in her own way.
Toutes les publications
PrevPrécédentIdeas for Christmas gifts: Kimpex
SuivantElectric, hybrid or gas-powered quads – which is the future?Next

Finntrail Trace 30l Hiking Backpack
Yamaha Grizzly SE EPS 2022 – The tradition continues.
Augusta Motorpark: You won’t come out clean, we guarantee it!
A ride in Hawaii at Waipi’o on Horseback Ranch!
Electric, hybrid or gas-powered quads – which is the future?