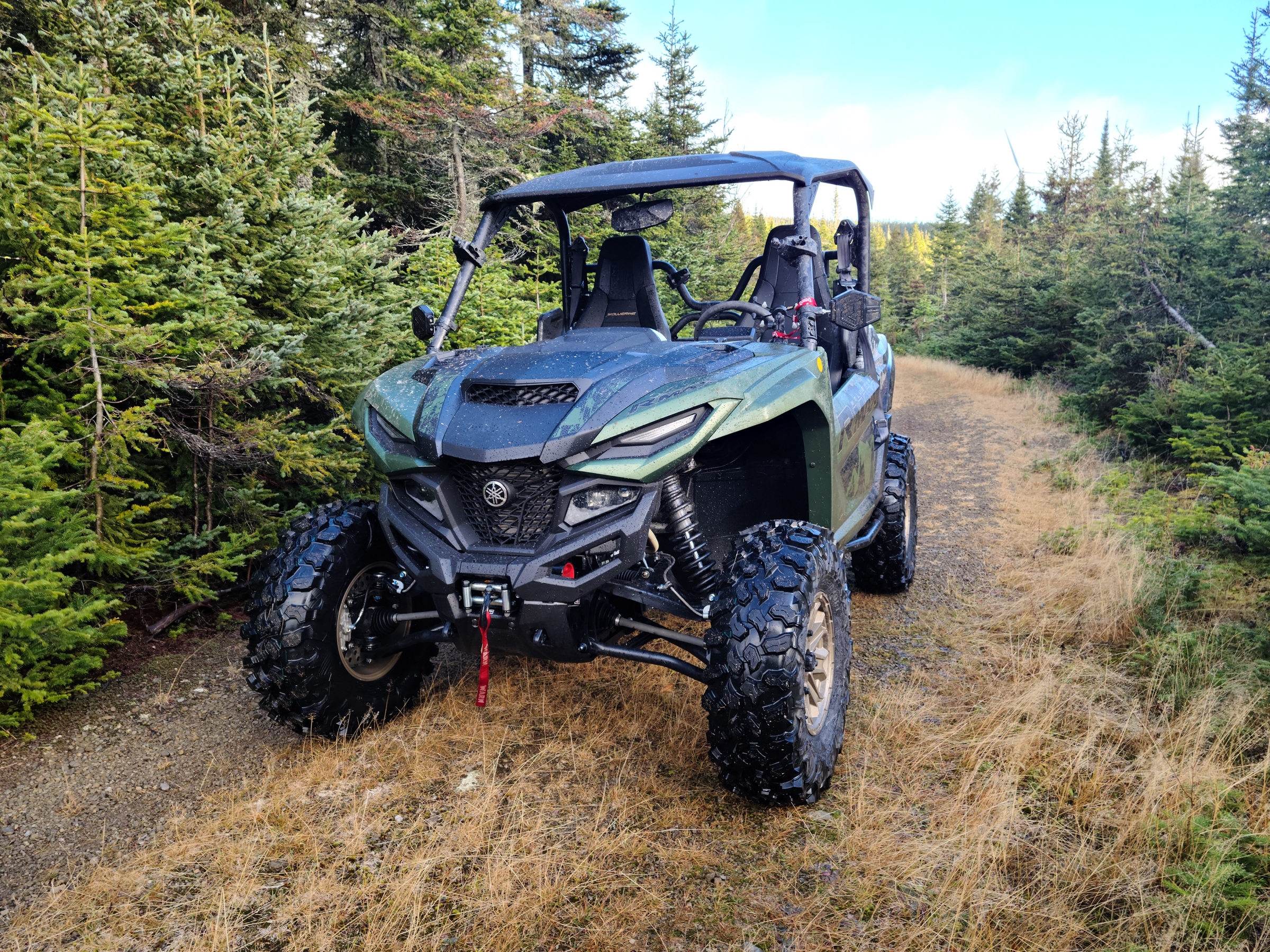 In early September, Yamaha announced an all-new family of side-by-side vehicles, the Wolverine RMax family (Read The Wolverine RMAX 1000 – Yamaha Is Showing Us What It’s All About). Offered in 4 variations in Canada (and 6 in the United States), the RMax is available in 2-seat (RMax 2) and 4-seat (RMax 4) versions.

Although at first, one might confuse the Wolverine RMax 2 and the Wolverine X2, one soon notices the notable differences between the two models.

Everything about RMax 2 is bigger, stronger, or more powerful. The vehicle is 11 cm longer, 9.8 cm wider and 6.3 cm higher. The wheelbase (distance between the front and rear wheels) is 7.6 cm longer. This is due to the RMax chassis, which is longer and stiffer than the X2. Yamaha’s people tell us that this chassis has been optimized for more significant suspension travel. You can immediately see that the components are more massive, which makes the vehicle more resilient to handle the most extreme terrain. 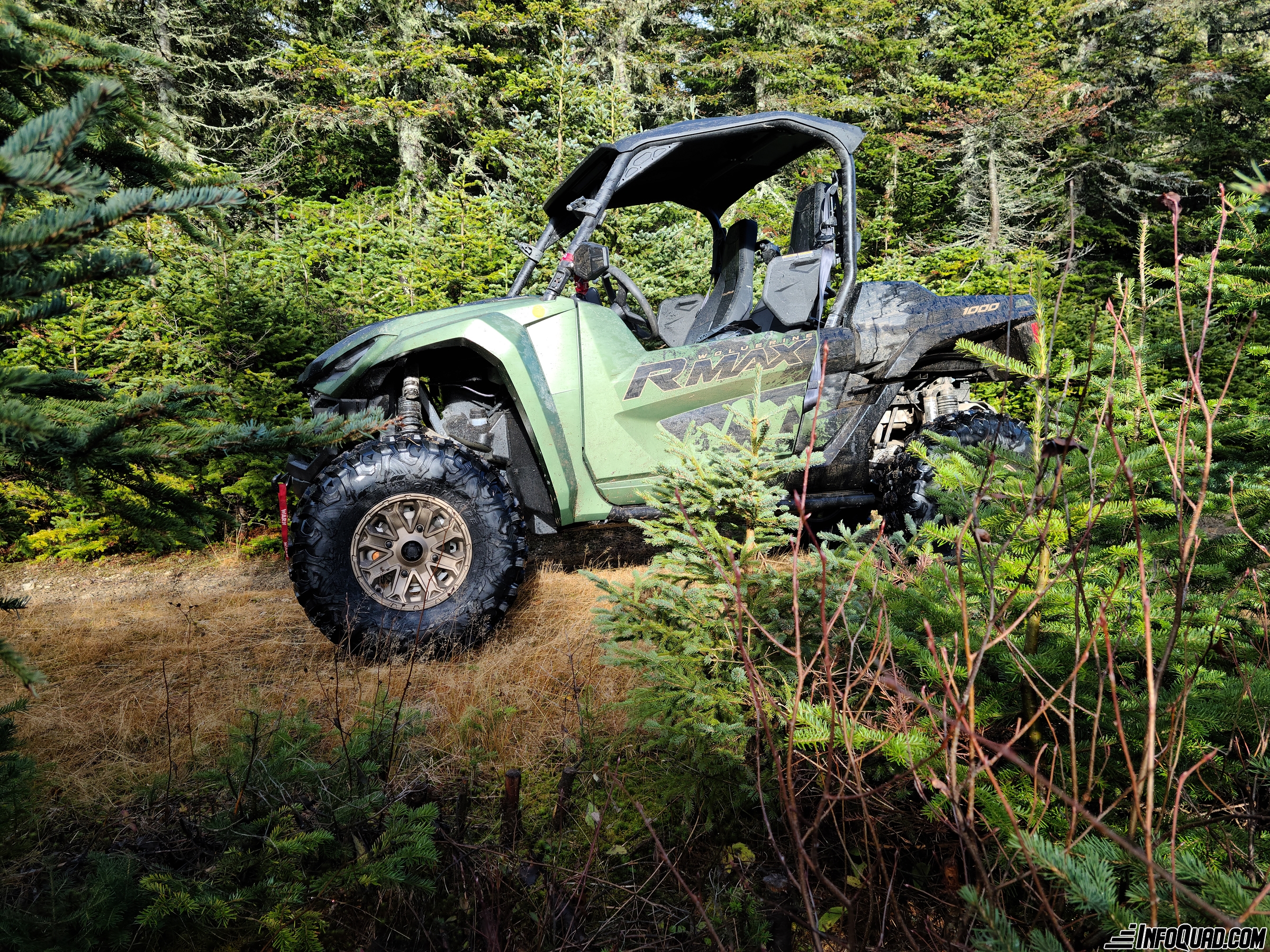 To propel the RMax, Yamaha has introduced a brand-new engine. It’s a 999cc engine with two parallel cylinders. The performance of this engine is remarkably impressive. Indeed, the engine could reach around 108 HP. The DMode system of the RMax SE manages engine behavior by offering Sport, Trail and Crawl modes.

In Sport Mode, the engine responds almost instantly when the throttle is pressed. The thrust is firm and steady. The recovery is exceptionally good over the whole power range. This mode is well suited for driving on trails or roads in good condition. If we’re negotiating a rougher area, with bumps or holes, our foot moves on the gas pedal, and the engine responds quickly to these changes, making the machine’s behavior jerkier.

In these circumstances, the Trail Mode is much better suited. Indeed, in this mode, the engine response is less aggressive and more modulated. Even on uneven trails or paths, you won’t feel any jolts, and you can drive comfortably.
The Crawl Mode is perfect for navigating over very rough and/or rocky terrain. The engine responds in a very progressive way, which makes negotiating this type of terrain easier.

Finally, the engine’s red zone is above 8500 rpm, which leaves a lot of leeway to the driver. Moreover, this engine configuration (999cc parallel twin-cylinder) gives us the impression that Yamaha could eventually fit it into the Grizzly’s chassis. It’s a request that returns year after year from the quad riders to have an engine option of two cylinders with a larger capacity. I sincerely believe that a 1000cc Grizzly would quickly become a best-seller at Yamaha. 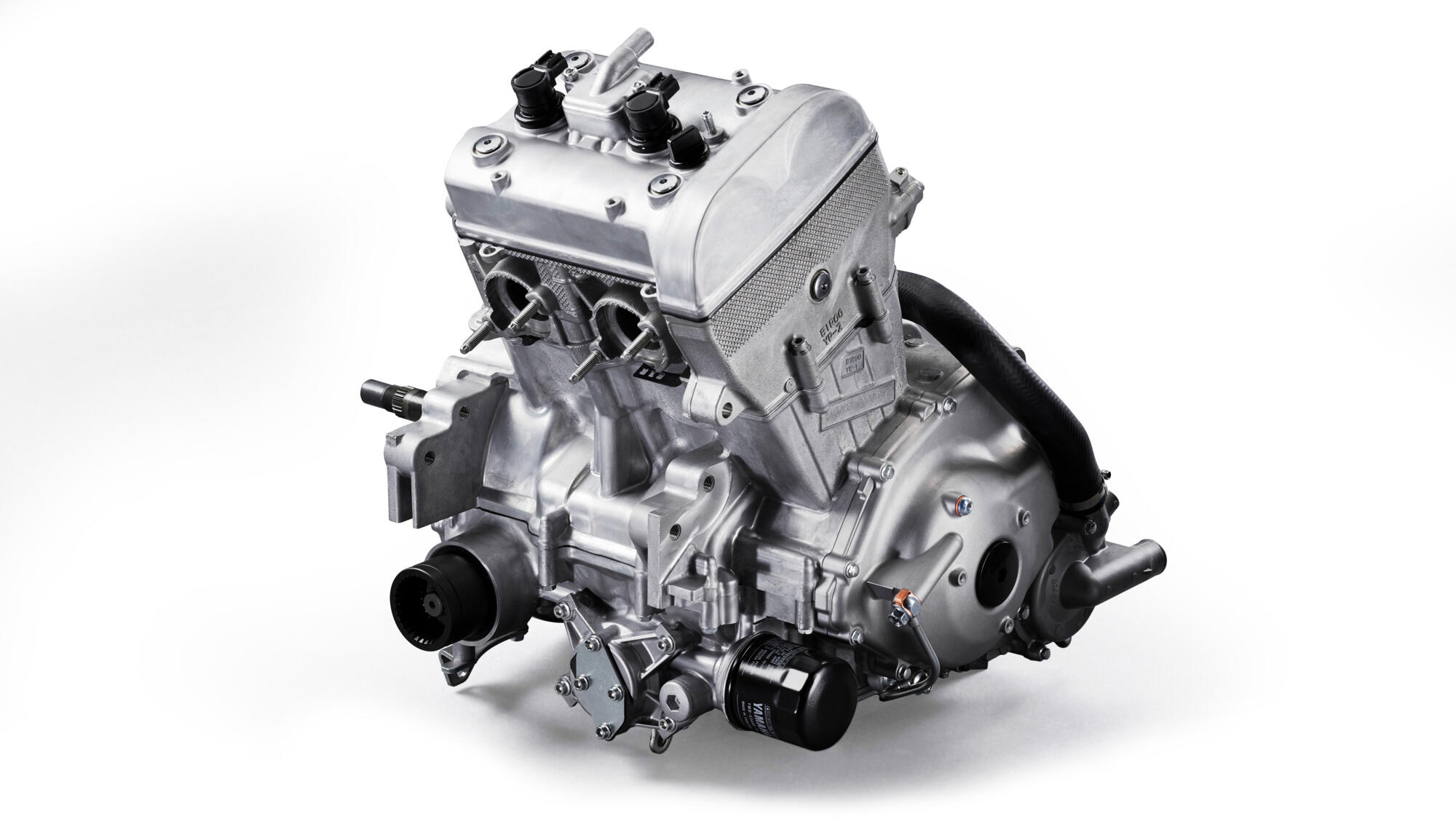 The transmission and the set of pulleys work very well. At no time did I feel the belt slip. The CVT Ultramatic is known for its reliability and efficiency. It’s no different for the RMax 2.

The gear lever is easy to operate. At any time, from the stopping point, you can switch from one selection to another with disconcerting ease. Even when the engine is turned off, you can shift easily from one gear to another. The only improvement would be to add a Parking position. Although the vehicle is equipped with a handbrake, I prefer the Parking position in a trailer or when the vehicle is parked on a slope.

The transmission offers us 3 modes: 2WD, 4WD and 4WD with locked differential. You can switch from one mode to the other even when the vehicle is not stationary. 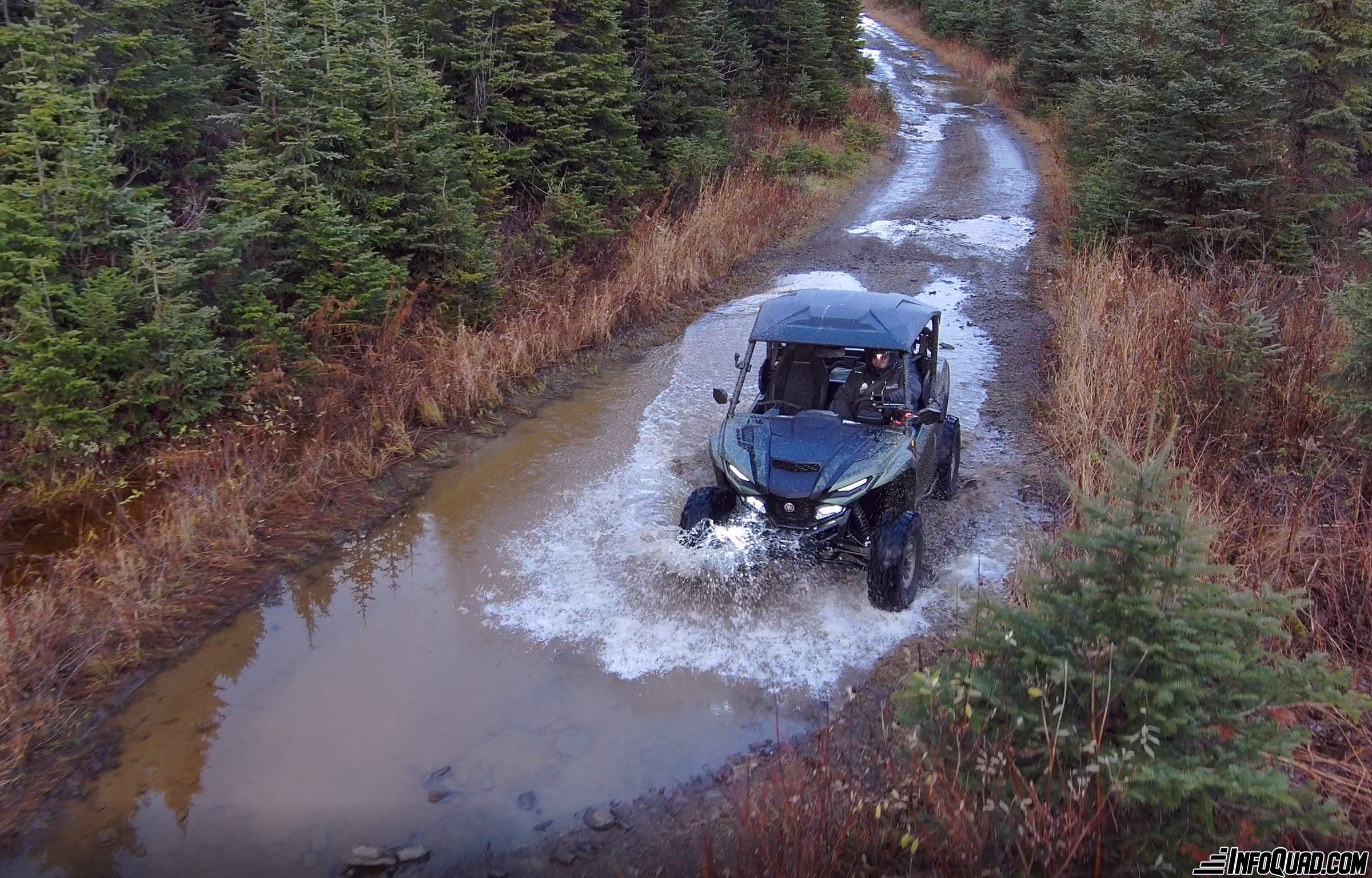 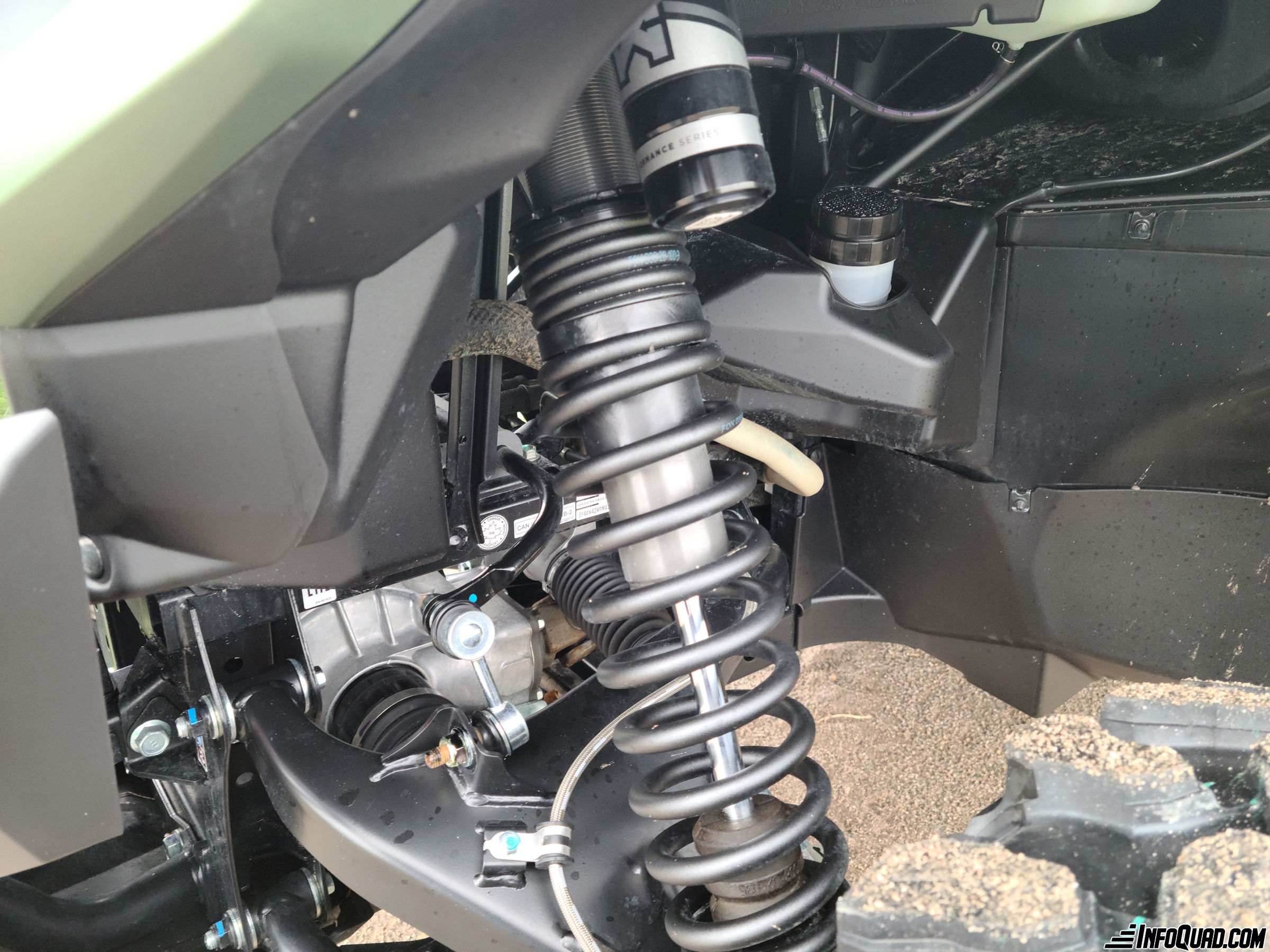 The 14 inches ground clearance and A-arms reduce the risk of suspension components rubbing against rocks or other objects.

The QS3 shock absorbers are still among my favorites because of their efficiency and, above all, the ease of adjustment. We have three positions: soft, normal, and rigid. You can switch from one position to the other without any tools using a button. 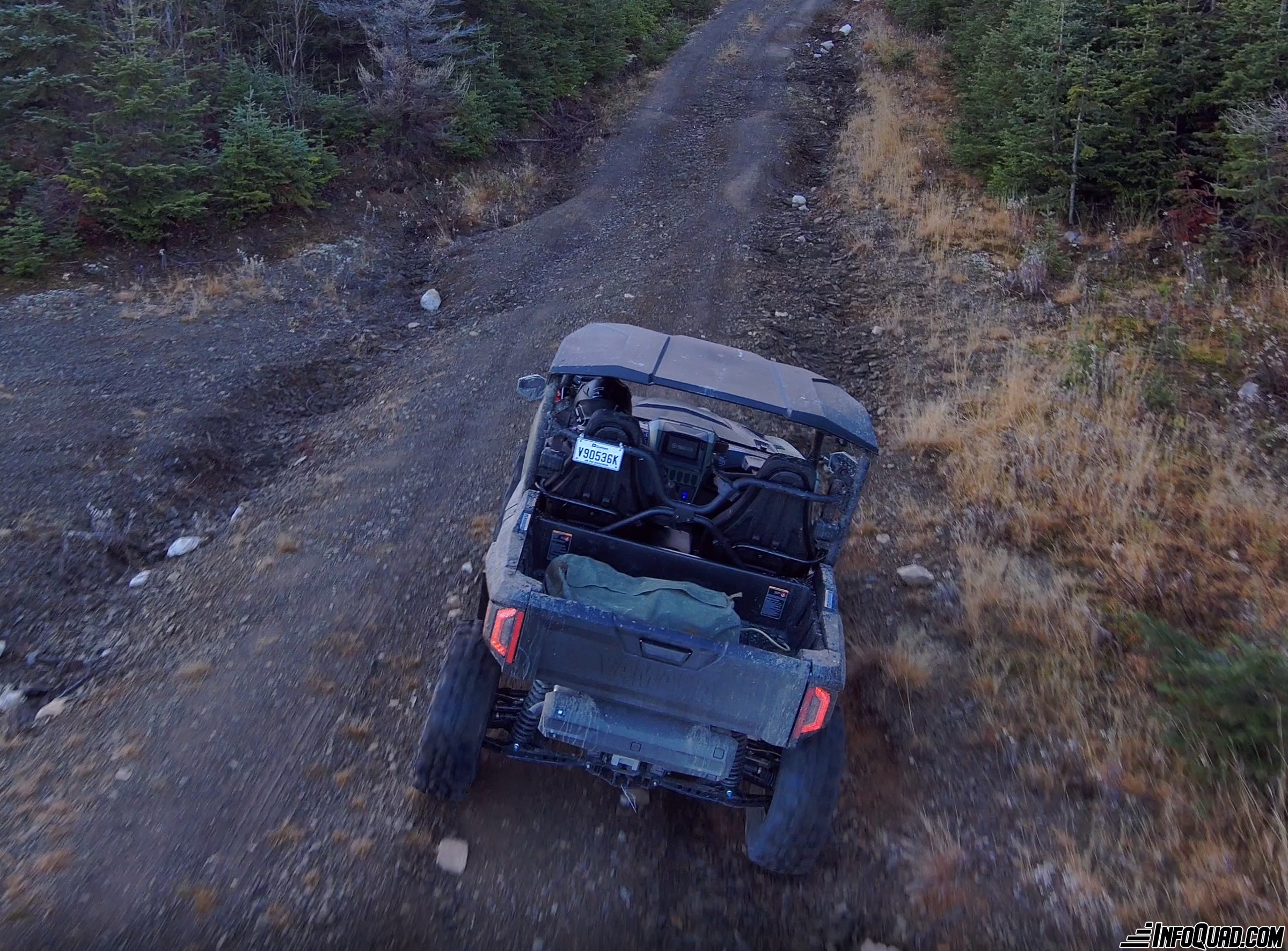 During my test drive, I was surprised by the effectiveness of this suspension. I made a point of really trying it out in some very rough places. Mined paths, deep rollers, big rocks I didn’t spare it! I went off the federated trails and took small adjacent and even rather remote paths. The RMax 2 is a vehicle that allowed me to explore a vast and rather inhospitable territory. Wow! I was surprised at how easy it was for this vehicle to climb, squeeze through and overcome obstacles.

The RMax 2 has an electronically assisted driving system. I found it well calibrated with more assistance at low speeds and less and less as the vehicle gained momentum.

The driving is precise and allows us to get around obstacles easily. Due to its rather high center of gravity, the vehicle has a small tendency to understeer when aggressively entering sharp curves. It’s not unusual, and I was bold enough to hit the brakes while turning sharply, and the understeer remained pretty weak. I did all my driving tests with the shocks in the normal position.

The driving position is comfortable and provides a good view of what is in front of the vehicle. The seats allow you to stay firmly in place when taking a turn. In addition, they offer good lumbar support. 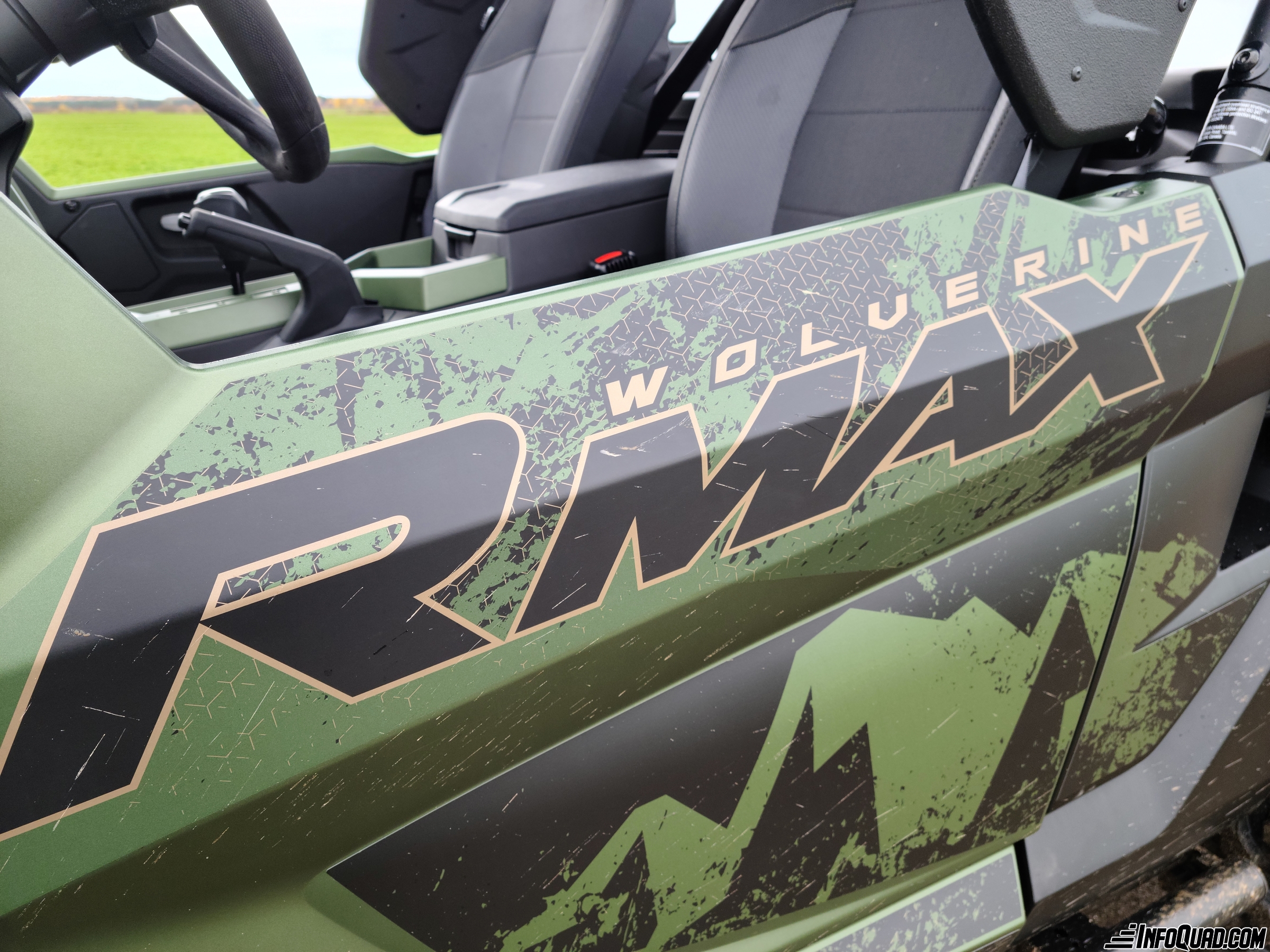 The look of the RMax 2 is stunning, especially at the front. The shape and positioning of the headlights and LED marker lights give it a distinctive look. Yamaha has put a lot of care into the choice of materials, the finish, and many small details. The doors, as well as the tilting tray panel, are solid and close very well. You don’t feel any play. I’m not a fan of the shoulder protector, which is designed to keep the driver inside the vehicle in the event of a rollover. I would have preferred slightly higher doors that follow the lines of the front and back of the quad. Among the little extras, I would like to highlight the hooks in the pivotable dump bed and the tie-down hooks at the vehicle’s front. 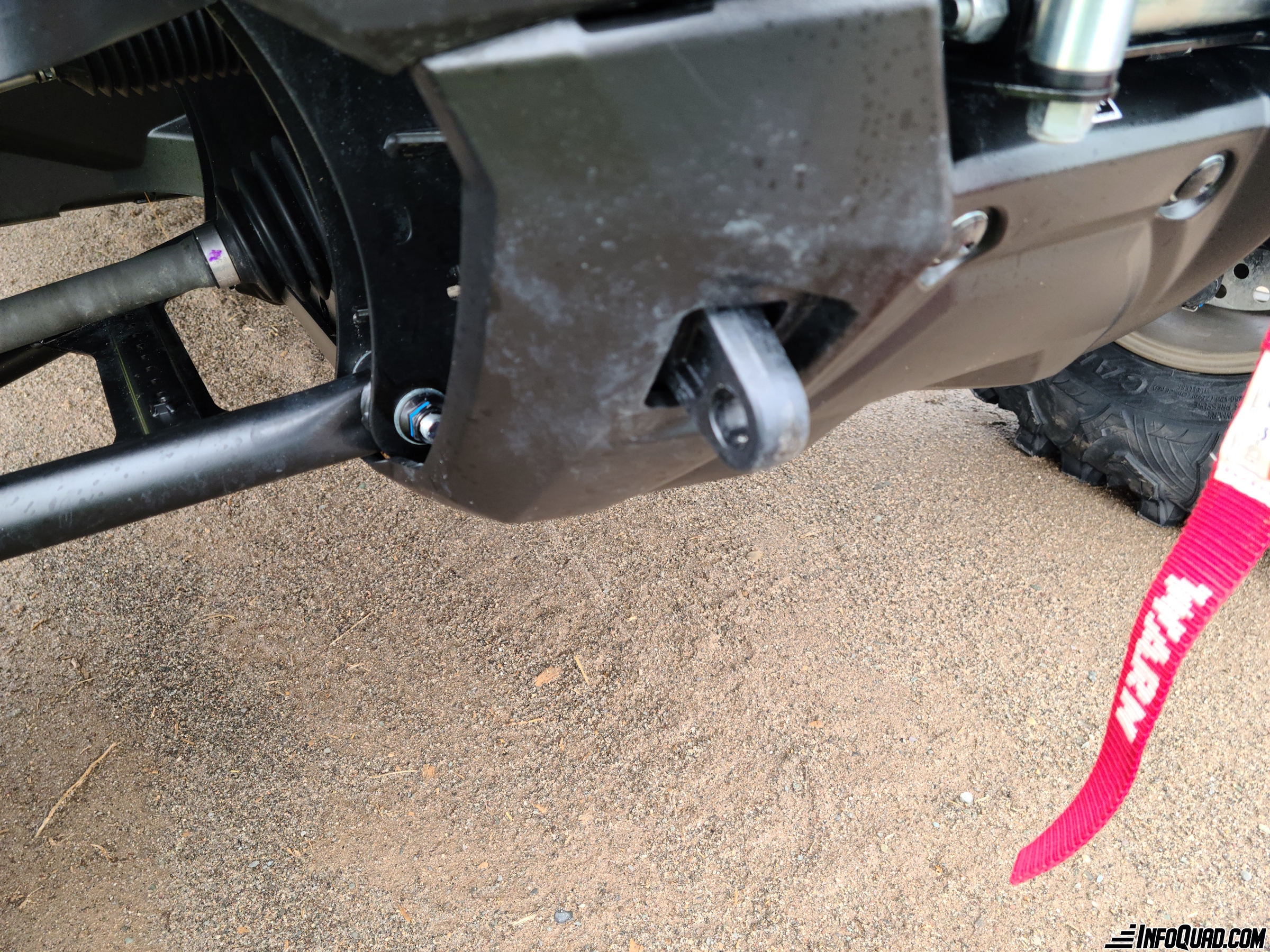 The finish of the cockpit is also very neat. The steering wheel, the top of the center armrest as well as the shift lever has a soft surface that makes them more comfortable. Knee rests on the side of the door, and center console are small details that can make all the difference at the end of a long ride. 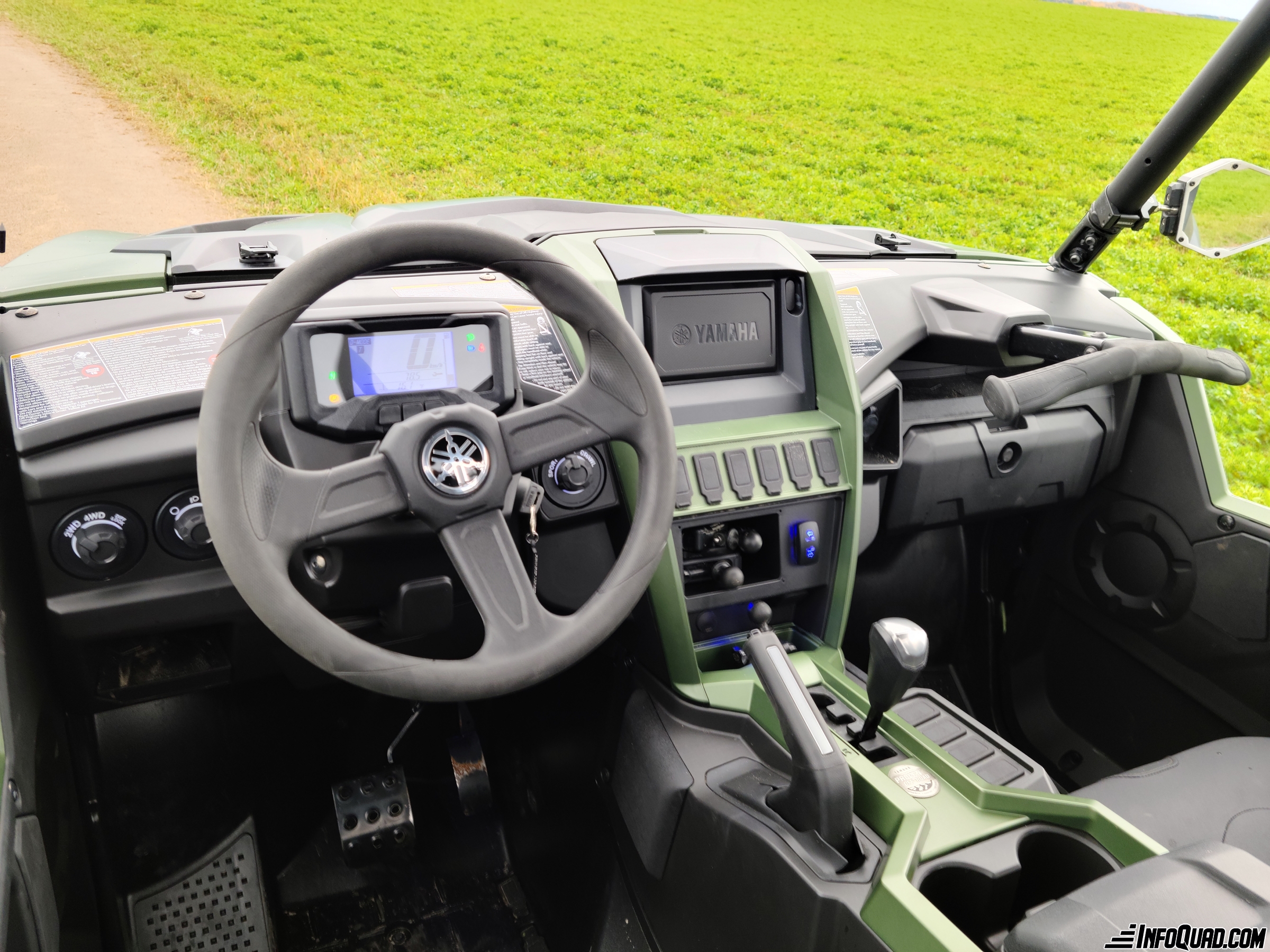 The RMax is designed to be easily accessorized. There are no less than ten slots for future switches, not including slots for speakers, an audio system, and the optional Yamaha Adventure Pro system.

The digital gauge is well positioned and easy to read. It’s intuitive, and you can easily adjust settings such as the time, for example, or change the information you want to see by default.

I must admit that I was surprised by the Wolverine RMax 2 1000 SE. After my trial, I now prefer it to the YXZ which I’ve had a crush on since our paths first crossed in 2016. 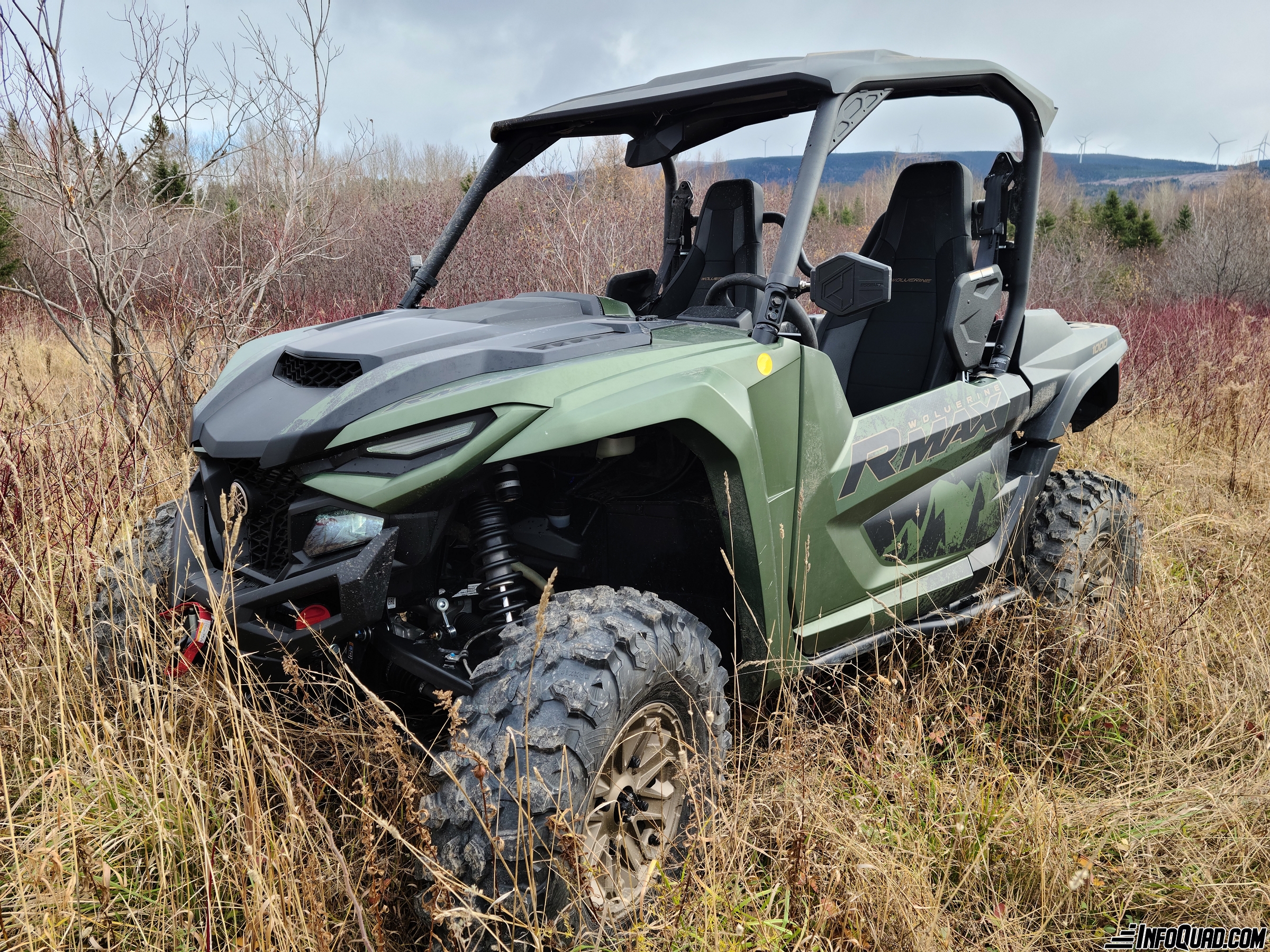 With a few days of hindsight, the RMax 2 1000 SE is better suited to my quad rider needs. In addition to having similar technical characteristics in terms of the engine and suspension, the RMax does not have the YXZ platform’s disadvantages.

If you have the chance to try the Wolverine RMax 2 1000, I encourage you to do so.

I would like to thank our partner, Yamaha Canada, for making this trial possible. 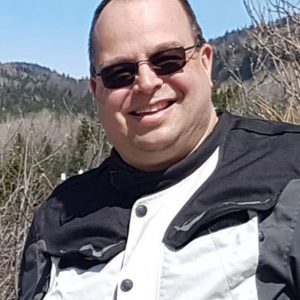